Genetic determinism, according to Wikipedia, is the belief that genes, along with environmental conditions, determine morphological and behavioral phenotypes. It does not mean that genes totally rule, and will decide your preferred political party, your religion, and your love of carrots. It just means that genes are really important in shaping who you are.

So how much is decided by genes, and how much by environment? How much nature and how much nurture? Studies of identical twins have helped us answer this question. Identical twins are the result of an early split of an embryo, thereby giving two people instead of one, but with exactly the same set of genes.

Below is a picture of my grandmother, Martha, and her identical twin Mary. In the small town where they grew up they were known as the Sin Twisters. No one could tell them apart. They’d often swap out for taking tests in high school, and even on dates. And no one was the wiser. Shades of the movie The Parent Trap, but they turned out better than Lindsey Lohan. So, give two people the same set of genes and they’ll look pretty much identical. It is easy to conclude that genes are extremely important in determining appearance. But what about other things, like intelligence, athletic ability, and health? Twins can also help us figure out the genetic contribution for these features. The key is to study twins that were for some reason separated at birth and raised in different environments. If genes are really important in defining characteristics then one would predict that identical twins raised by different families would still show significant similarities, above and beyond their physical appearance.

Sir Francis Galton was the first to use twins to study the genetic contribution to traits. He was a cousin of Charles Darwin’s and was very much taken by the theory of evolution and interested in studying the inheritance of characteristics, including intelligence. He coined the term “nature versus nurture” and concluded from his work that nature was more important than nurture.

The modern day Minnesota Twins Study is one of the most comprehensive investigations of nature versus nurture. They have analyzed hundreds of identical and fraternal twins, raised in the same or different environments. It turns out that environment has relatively little effect on physical features. If you take identical twins and rear them apart they still look identical. And if you take fraternal twins and raise them together they still don’t look the same, although there will be similarities, in part because they do share half of their genes.

IQ also showed strong heritability, with the results indicating that about 70 to 80 percent of a person’s IQ is determined by genes. There were also some surprising results to come from the study, showing genetic contribution to unexpected psychological attributes. For example, there seem to be happy and sad genes. Identical twins, even when raised apart, scored more alike in measures of happiness than fraternal twins. And another surprise was the connection between genes and the level of religiosity. One might think that family environment in this case would be particularly important, with children exposed to religion on a weekly basis much more likely to become religious. But if one identical twin was religious, then the other was more likely to be as well, even when raised separately. Of course genes did not pick the faith. One twin might be a devout Protestant, while the other twin, raised by a different family, would be a devout Jew. And what about health? Genes are clearly important here as well, with hundreds of diseases now known to have a genetic component.

Of course genes are also important in defining our athletic ability. As an example of the relationship between genes and athleticism consider the dogs shown below. They are both female whippets of about the same age. But one has a mutation in the myostatin gene, and as a result her muscles have grown to rather enormous proportions. She is one very strong and very fast whippet. It turns out that some human body builders have natural occurring mutations in the same gene. They were born to body build. 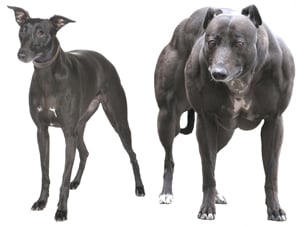 So genes play an important role in defining both our physique and our psyche. But it is also important to note that they don’t completely define us. Identical twins are certainly similar, but they are not the same. Although our genes establish limits, within those limits there exist a wide range of possibilities, determined by chance and our environment.

Finally, there is the question of how much we currently understand about the relationship between genes and traits. Suppose that we could completely control the genetic makeup of our offspring. Perhaps shockingly, this possibility is not as far-fetched as you might think. Could me create children that are incredibly smart, healthy, good looking and athletic? The truth is that right now we understand very, very little about the genetic equations that define these traits. And it is clear that the answers are going to be, in general, extremely complicated.

But there is currently a revolution going on in the world of DNA sequencing. The price continues to plummet. We are now sequencing the DNAs of tens of thousands of people, and in the near future it will be millions. We will then be able to connect the dots, and relate the different orders of the G,A,T,C bases to the different traits of the people that carry them.

The future of our species could get very interesting.

About the Author: Eveloce was an undergraduate at UCLA, received his PhD from the University of North Carolina at Chapel Hill and was a postdoctoral research fellow at Harvard Medical School. He has published over one hundred research articles, co-authored the third edition of the medical school textbook Larsen’s Human Embryology, and serves on the editorial board of the science journal Developmental Biology. He wrote the book “Designer genes: A new era in the evolution of man” published by Random House and available at Amazon.